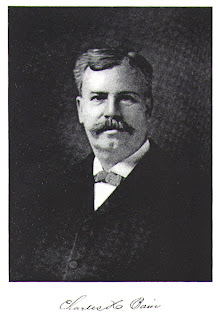 Charles Henry Bain, eldest child of Captain James and Harriet M. (Rounds) Bain, was born in Portland, June 26, 1859, died June 13, 1905. He was educated in the public schools and at Gray's Business College, from which latter institution he went as a clerk with the ship chandlery of Bain, Russell & Company, which became Charles H. Bain, when he bought out the old partners. Mr. Bain carried on the business for about ten years, to 1897, when he gave it up on account of failing health and became confidential clerk to the firm of J. S. Winslow & Company, where he was employed until about the time of his death. Mr. Bain was a Republican in politics and a Universalist in religion. He was a member of Beacon Lodge, No. 67, Independent Order of Odd Fellows, and of Eastern Star Encampment, No. 19. When a young man he was for some time a member of Company B, Portland Cadets.