1920 census entry for the mower farm 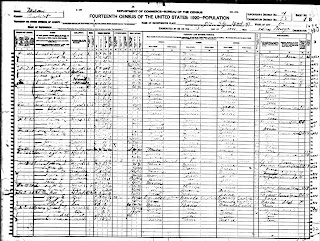 1920 U.S. Federal Census Record for Frank L. Mower
SOURCE: 1920 U.S. Census, Penobscot County, Maine, population schedule, Bangor City, Ward 5, enumeration district (ED) 68, sheet 1B, dwelling 21, family 21, Frank L. Mower household; digital image Ancestry.com (http://www.ancestry.com/): accessed 24 Oct 2007; citing National Archives microfilm publication T625, roll 645.
[click here to view .pdf image of this census record]
The location of the family is listed on Pushaw Road. In 1920, Frank L. Mower (my great-grandfather) is listed as the head of the household, he being a married white male aged 44. His wife, Mildred M. Mower (my great-grandmother), is listed as a married white female age 41. Both were able to read, write and speak English. Both Frank and Mildred, along with their parents, were born in Maine. The census indicates that the farm was owned, but mortgaged.

Ormand Eastman, an uncle (being the brother of Frank L. Mower's mother Elizabeth Eastman), is also living with the family. He is listed as a single white male aged 81. He was born in Maine, as were his parents. He was able to read, write and speak English. "None" is entered as his occupation.
Posted by dale walter mower at 7:08 PM