1880 census entry for the mower farm

Well, it's a good thing that I'm working my way through these documents one more time. In revisiting the 1880 census, it makes me recall a discrepancy I had regarding the death date of my great-great-grandfather George Mower - and which calls to me the reminder that you should always verify information with original sources. According the the Mower Family History by Walter L. Mower, my ancestors death date was 23 Jan 1883, at the age of 55. However, this conflicted with his gravestone in Maple Grove Cemetery, he his death is shown as 23 May 1880, at the age of 53. The published death records of Bangor, Maine, compiled by Michelle Thomas also show the 23 May 1880 date. I recall this as in the 1880 census, George Mower is not included, and his wife is shown as widowed, providing further evidence that the 1880 date is correct. 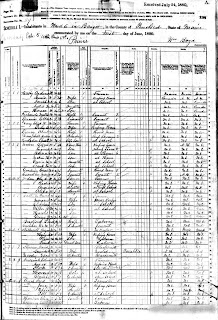 [click here to see .pdf image of this census record]

Lizzie Mower (nee Elizabeth Eastman), my great-great-grandmother is shown as the head of the household at the farm in the 1880 census, a white female aged 46, widowed, keeping house. In this census, it shows that she and her mother were born in Maine, while her father was born in New Hampshire. Others in the household:

1) Eugene A. Mower, her son, a white male aged 17, his occupation shown as "driving team" and we learn that he was unemployed for 6 months during the census year. He like his siblings listed below, attended school within the year. And he, again like all his siblings, was born in Maine as were both parents.

2) Horace B., her son, a white male aged 16, his occupation shown as "at home" and he also was unemployed for 6 months during the census year.

4) Gracia M., her daughter, a white female aged 8, her occupation is shown as "at school."

5) Frank L. (my great-grandfather), her son, a white male aged 5, his occupation is shown as "at school."

6) Chas. A. Goodwin, a single white male aged 25, his relationship is shown servant and his occupation as hired man, he had been unemployed for 3 months during the census year. Chas. and his parents were all born in Maine.

7) Maria Chandler, a white female aged 20, both her relationship and occupation are listed as servant, she having been unemployed for 2 months during the census year. She was born in Maine, her father born in New Hampshire and her mother born in Maine.
Posted by dale walter mower at 7:31 PM