Revolutionary War Veteran Elisha Gibbs and his wife Silence are my 4th-great-grandparents. I found this reference in an article entitled "Historical Sketch of Foxcroft, Maine" in Sprague's Journal of Maine History - 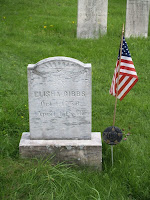 Every year from the beginning of the town's existence liberal provision was made for the poor. For the greater part of the time they were boarded in different families. For instance, in 1833, it was voted "to set up Elisha Gibbs and his wife at auction to the lowest bidder," "After several bids," -- and these are the words of the record, -- "Elisha Gibbs and his wife were struck to Silas Paul for the some of forty-seven dollars and fifty cents for one year, to be maintained free of any expense to the town during said time." Evidently the "high cost of living" was no problem in those days as it is now. For some years the town maintained a poor farm which was on the shore of Sebec Lake near Steadman's Landing.

Of note in this, Silas Paul was their grandson - he was married to two sisters - Roxanna Mansfield and Jane Hosmer Mansfield. Roxanna and Jane were the daughters of Thomas and Hannah (Gibbs) Mansfield, the daughter of Elisha and Silence.
..........
Source: "Historical Sketch of Foxcroft, Maine," Sprague's Journal of Maine History, Vol. V, No. 2 (September 1917): 73.
Posted by dale walter mower at 10:42 AM