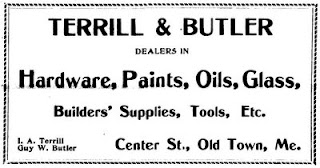 While researching Guy and Gertrude (Terrill) Butler, I found this adverstisement in a 1910 Old Town city directory.

The relationships: Isaac Anthony Terrill was a brother of my great-grandfather Jacob William Terrill. Guy Warren Butler was married to Isaac's daughter Gertrude.

Guy W. Butler was born in Cumberland Center, Maine, 28 Jan 1874, the son of Edward and Etta (merrill) Butler. He died in Old Town, Maine, 5 Nov 1945. Interestingly, his obituary doesn't mention this endeavor, but includes a long list of employment, as follows:

He first started his life work at the age of nine as a telegraph operator for his father, a station agent for the Maine Central Railroad company. He attended Farmington schools and later was a telegraph operator in Old Town for many years. He was also employed as a bookkeeper for the T. R. Savage company in Bangor. He later went to Millinocket during a typhoid fever epidemic where he became assistant bookkeeper for the Great Northern Paper company. After that Mr. Butler was employed in Waterville for the Central Maine Power company, as a bookkeeper and was also an accountant for several different firms. While living in Old Town, Mr. Butler assisted Thomas Clark, a hydraulic engineer, in his work, the study of which became a hobby with Mr. Butler. After his work in Waterville, he became immigrations, customs and naturalization officer and held this position for 16 years. He received his training for this work in Montreal. Part of his work took him into Canada, while the other part was in the United States, and he resided in Vanceboro. Due to ill health he retired from active work and returned to his home in Old Town two years ago last May. Although having lived in Farmington 24 years, he held his residence in Old Town for the past 38 years. Even though his work took him to many places his home and his thoughts were always in Old Town. He had the honor of having worked to the top in the work and position which he held for so many years.